Many religious and non-religious observers have said that one remarkable trait that separates us moderns from ancient peoples is our belief that we are basically good. We’ll readily agree that “no one’s perfect,” but other than that, most of us have a fundamentally good orientation and are of a wholly different moral and psychological make-up from a Hitler, or a serial killer, or a rapist. From a religious and specifically Christian perspective, then, we have no need to be forgiven, much less “saved” from anything, since we haven’t done anything terribly bad. I would argue that this view is dangerously mistaken, however, and the excerpt below from Mike McKinley’s Passion shows this error in stark contrast to what is true. There is a place in this (so far) excellent and short book where McKinley argues that because God is perfect and holy, his anger at human oppression and injustice is completely justified and righteous; indeed, God’s wrath is “actually part of His perfection – not a suspension of it.” He then argues that if people are made in God’s image, then we would expect this righteous anger to be expressed at times by people. To illustrate this, he tells:

“A friend of mine recently told me about a time in an east Asian nation where his hosts drove him into the capital city. As they entered the city, they were confronted by a long line of young girls, lined up by the side of the road. These girls had been sold into slavery as prostitutes (often by their parents), and they would spend their lives being used and abused until they were finally cast aside when they were no longer desirable. My friend described his feelings as he saw these girls: an anger, a rage in his heart that made him feel as if his chest was going to rip in two. “…If that goes for humans, it goes for the God who made humans, too… [And here is the key part for us] But where we really run into a problem, where we really object to God’s wrath and justice, is when it comes to us. We may be happy with a God who punishes the rapists and the murderers, but we aren’t happy with a God who punishes us. But where would you draw the line? How much should He tolerate from you? How much of your pride, anger, deceit, manipulation and selfishness do you think God should overlook?… The Bible tells us where God draws the line: He demands perfection” (18-19). 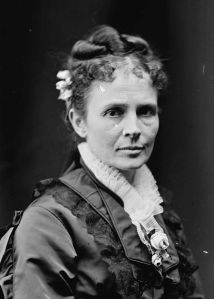 President Garfield (1831-1881) was of a very different temperament from his wife, Lucretia. He was “big-hearted and cheerful…nearly impossible to resist,” and she was “soft-spoken and very private,” at times even fearing that others viewed her as “cold” and “heartless.”

In the endlessly fascinating Destiny of the Republic: A Tale of Madness, Medicine and the Murder of a President (Anchor, 2012), Candice Millard tells their love story: one of emotional frustration, great heartbreak, and enduring love, passion, and devotion.

They had a bumpy start, with a courtship that was “long, awkward, and far more analytical than passionate.” Though Lucretia loved Garfield, she hardly showed it, struggling to give physical affection and frustrating him emotionally. He was not in love with her when they married – he didn’t feel toward her as most of us expect someone to feel when they marry – and she knew it. This pained her terribly, and combined with long periods of distance because of his participation in the Civil War and his work in Congress, it made made their first years of marriage “nearly unbearable.”

Then James had an affair with a young reporter from New York with whom he fell in love with “the kind of love he had for so long yearned to feel for Lucretia” (118). He soon confessed his sin to Lucretia, and though she was indignant and heartbroken, she quickly “forgave him, demanding only that he end the relationship immediately.”

This he did, but he now feared losing completely Lucretia’s heart.

It was here that “his own feelings began to change. As he watched her bravely endure the pain and heartbreak that he had caused, Garfield suddenly saw Lucretia in a new light. She was not cold and unreachable but strong, steady, and resilient. Slowly, he began to fall in love with his wife.”

“As the years passed, Garfield’s love for Lucretia grew until it eclipsed any doubts he ever had. His letters…were now filled with passionate declarations of love. Lucretia was finally the object of James’s ‘gushing affection.’ (118)”

These brief excerpts from Garfield’s letters give us a glimpse of this passionate love:

“I here record the most deliberate conviction of my soul. Were every tie that binds me to the men and women of the world severed, and I free to choose out of all the world the sharer of my heart and home and life, I would fly to you and ask you to be mine as you are” (119).

“You can never know how much I need you during these days of storm. Every hour I want to go and state some case to your quick intuition. But I feel the presence of your spirit” (119).

“It is almost painful for me to feel that so much of my life and happiness have come to depend upon another than myself. I want to hear from you so often, and I shall wait and watch with a hungry heart until your dear words reach me” (119).

When she became sick, Garfield bordered on desperation. To him she was “the continent, the solid land on which I build all my happiness. When you are sick, I am like the inhabitants of countries visited by earthquakes. They lose all faith in the eternal order and fixedness of things” (119).