Seeing the end of his earthly life draw near, the great eighteenth-century theologian Jonathan Edwards spoke to his daughter Lucy, who attended him during his last days, the best last words I have ever seen come from a dying father. Edwards, who dedicated his life to studying and teaching about a God who is sovereign over all things, knew he could entrust his family to this same God as their heavenly father. A child may learn nothing else from his father (or mother!) but to love God and walk in his ways, but this is more valuable than the greatest earthly inheritance any parent can hope to leave his children. This is the best thing a father or mother can do for their children, and it’s sweet to see the great theologian of the Great Awakening be that kind of father. From John Piper’s God’s Passion for His Glory: Living the Vision of Jonathan Edwards (Crossway, 2006):

“Dear Lucy, it seems to me to be the will of God that I must shortly leave you; therefore give my kindest love to my dear wife, and tell her, that the uncommon union, which has so long subsisted between us, has been of such a nature as I trust is spiritual and therefore will continue for ever: and I hope she will be supported under so great a trial, and submit cheerfully to the will of God. And as to my children you are now to be left fatherless, which I hope will be an inducement to you all to seek a father who will never fail you.” 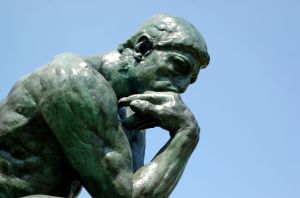 In The Life of the Mind (Baker, 2002), philosophy professor Clifford Williams reflects on the power of thinking and learning in leading us to greater knowledge, allowing us to make our beliefs more coherent, and giving us intellectual pleasure. In the excerpt below he describes how he went from teaching philosophy as a mere academic matter, the kind of thing that may remain within the four walls of a classroom and not have hands and feet, so to speak, to realizing that in philosophy he could teach students to live well, that is, with virtue, and even to “prepare to die,” as so many philosophers before have remarked about their vocation. This is the sort of vision that I believe motivated one of my college professors, who taught a philosophy course on Dante’s Divine Comedy, to state at the beginning of the semester that, “We read Dante for joy.”

“For more than two decades of college teaching, I listed three objectives in the syllabi for the philosophy courses I taught: to become acquainted with core philosophical issues, to interact with these issues, and to assess them from a Christian perspective… It did not occur to me that the courses could have more aims. And I never asked myself what else I wanted students to gain from a course. Courses were academic enterprises, I presumed, and should not be tainted with extraneous intentions.

“…Then I changed… I began reading the novels of Fyodor Dostoyevsky and Leo Tolstoy. Some of their probing inquisitiveness into human motivation rubbed off. I read some of the master analysts of the human condition – Augustine, Blaise Pascal, Ernest Becker, Søren Kierkegaard. I began listening to students in my office, at lunch, in the hallway, on the telephone. I discovered that they had deep feelings and dreams for the future. Then I turned forty and realized I would die someday. I asked students, ‘What do you like most about living?’ I gradually became less of an emotional hermit and ceased regarding myself largely as an academic machine.

“One afternoon during my twenty-eighth year of teaching, a question hit me: What do I really want students to get out of my courses? I promptly got out a piece of paper and started writing. The list of objectives grew to thirteen. I wanted students to become more imaginative, more adventuresome, and more courageous. I wanted them to develop a passion for learning while maintaining habits of self-discipline. I wanted them to think for themselves and make the Christian faith their own. I also wanted them to become more prepared to die.” (44)

What does it look like for a father to wisely and lovingly instruct his children in the realities of life? It looks like James Garfield (1831-1881), twentieth president of the United States, turning to books – those reliable and patient teachers – to teach his children a lesson in the difficulties of life, from Destiny of the Republic: A Tale of Madness, Medicine and the Murder of a President (Anchor, 2012) by Candice Millard (given to me by my dear parents-in-law):

“Searching for a way to teach his children this hard truth [the inevitability of death], to prepare them for what lay ahead, Garfield had often turned to what he knew best – books. After dinner one evening, he pulled a copy of Shakespeare’s Othello off the shelf and began to read the tragedy aloud. ‘The children were not pleased with the way the story came out,’ he admitted in his diary, but he hoped that they would come to ‘appreciate stories that [do not] come out well, for they are very much like a good deal of life'” (19).