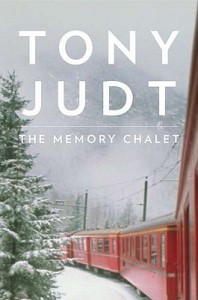 Known for his masterful history of post-World War II Europe, Postwar (Penguin, 2006), historian Tony Judt wrote The Memory Chalet (Penguin, 2010) at the twilight of his life, almost entirely incapacitated from ALS (Lou Gherig’s disease). This is a series of essays recalling various times in his life to which his mind would turn for comfort and entertainment while trapped in his own body. He writes on various topics, but has a lot to say about today’s political environment, which he believed lacks the sense of a common purpose and a common good that marked earlier generations. Below is an excerpt which I would wholeheartedly affirm:

“We have substituted endless commerce for public purpose, and expect no higher aspirations from our leaders. Sixty years after Churchill could offer only “blood, toil, tears and sweat,” our very own war president [George W. Bush, president at the time of writing] – notwithstanding the hyperventilated moralism of his rhetoric – could think of nothing more to ask of us in the wake of September 11, 2001, than to continue shopping. This impoverished view of community – the “togetherness” of consumption – is all we deserve from those who now govern us. If we want better rulers, we must learn to ask more from them and less for ourselves. A little austerity might be in order” (32).